Do You Need to Upgrade Your Drupal Site?

We've been talking to our clients about Drupal upgrades a lot lately. This is not surprising, of course, given the recent release of Drupal 8, which signaled the end of life for Drupal 6.

The Drupal community is excited about all that Drupal 8 has to offer.  If you’re on Drupal 6, however, that excitement may be muted by the feeling that you're between platforms. You want to be thoughtful about your next steps. You want to anticipate all the possible consequences. The stakes are high.

Here at Advomatic we've been involved in many, many Drupal upgrade decisions in the last few months. We've gotten good at helping customers navigate the options.

So what are we now telling our current customers, and prospective customers? Read on.

The Move to Drupal 8

With the recent release of Drupal 8, the Drupal community has ended support for Drupal 6. On February 24th, 2016 Drupal 6 reached its end of life and is no longer maintained.

As a result, if you’re still using Drupal 6, it is important for you to plan for your site’s future. Initially, there are steps you can take to harden your site with additional security measures, but eventually, you’ll need to prepare for an upgrade.

There are many factors that can influence which course of action is best for your site. Do you have a complex set of custom functionality? Will your bespoke theme be difficult to upgrade? How many community contributed modules are you leveraging?

In most cases, it’s worth taking a step back to reevaluate whether your existing site is meeting your current organizational needs. More often than not, a simple upgrade is insufficient, and a more extensive redesign or re-architecting of the old site is recommended.

Should you upgrade your Drupal 6 site to Drupal 7?

Drupal 7 is, in many ways, still the framework of choice for complex projects. It is mature software with a robust ecosystem of contributed modules that can be combined to solve most problems – without the need for developing custom code. As for Drupal 8, if history serves as a guide, it could be another six months or a year before a critical mass of community contributed modules are available.

The contributed module landscape is continually evolving. As a result, Drupal 8’s appropriateness for a given project must be evaluated based on the unique requirements, and the status of the relevant modules.

Should you upgrade your Drupal 6 site to Drupal 8?

The Drupal core development team has put a high priority on providing a workable upgrade path directly to Drupal 8 from D6. As a result, there’s a good chance that the tools are already in place to migrate your site to D8. With so much depending on exactly how your legacy site was constructed, it is hard to provide a single recommendation that works for everyone. Certain contributed modules may require their own migrations, so it is essential to take an inventory of your site's functionality before proceeding.

While you’re evaluating what’s in place on your current site, it is worth taking the time to consider what could be consolidated or streamlined. You’ll basically be building a new site in Drupal 8 and moving your old content over, so it will be much simpler if you limit the new content types and scrap anything that you can live without.

What if you have no resources to upgrade your Drupal 6 site?

Since the window of community support has closed, it is important to take some initial steps to protect yourself until you’re able to allocate a budget to upgrade. For the time being, the community is actually still providing good support for Drupal 6, similar to the level before it was officially sunsetted, but this will diminish over time. How long D6 support will be “good enough” is impossible to say, as fewer sites are running it, and fewer people are maintaining it.

Since your site is likely at least five years old, you should also expect to begin encountering incompatibility with hosting providers. Take some short term steps, but plan the future of your site, even if that means downgrading it to a static site or moving to another platform.

There are several proactive changes you can make to your D6 setup that will help ensure you can survive unscathed until you’re ready to upgrade. The key concern, as the security updates become less available, is with access by untrusted users. For example, consider disabling comments, user registration, and all but the most essential user accounts. Harden your login forms, making sure they happen over HTTPS. Maybe even plan to publish your site as static HTML pages.

Should you upgrade your Drupal 7 site to Drupal 8?

If you already have a Drupal 7 site, there is no immediate need to upgrade. Drupal 7 will still thrive for another four or (probably) more years. Unless you’re actively looking to upgrade or redesign, you should just sit tight with your existing site. Most of the new functionality in Drupal 8 is already available for D7 via backported modules, so, for now at least, you’re better off working with what you already have.

Should you build a new site on Drupal 7?

If you’re planning a new site, there are a handful of compelling reasons to still choose Drupal 7, but really you should consider building with Drupal 8 at this point. There’s a good chance that D8 (and its available contributed modules) will be ready to meet your needs by the time you reach the build phase of your project. However, there are some obvious caveats here, which depend primarily on your budget, your risk tolerance, and how malleable your requirements are.

Should you build a new site on Drupal 8?

There are a number of good reasons to choose Drupal 8, if it’s a viable candidate for your project: internationalization, mobile-first front-end, improved content authoring experience, and a built-in configuration management system – to name a few. Many of the must-have D7 contributed modules have also now been built into Drupal 8 core. Completely revamped under the hood, the new version of Drupal represents a cutting-edge approach to site development. Also, by working with software at the beginning of its lifecycle, you’re maximizing your investment and extending your site’s longevity. 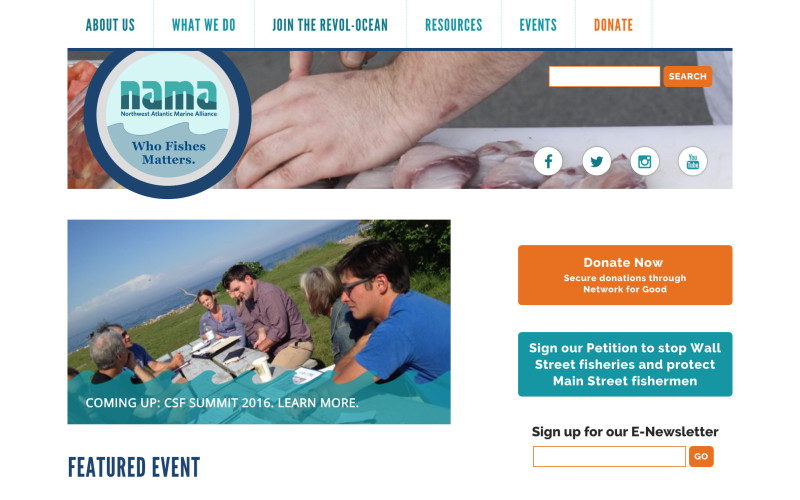 The Northwest Atlantic Marine Alliance (NAMA) came to us as a new client with their Drupal 6 site in need of an upgrade. After initially building a migration plan around a move to D7, we decided to use Drupal 8 instead. NAMA’s requirements were flexible and their original site was straightforward enough to make this move feasible. They benefitted from the extended lifespan of their new D8 site and a slew of new functionality, particularly improvements in content authoring.

You can read more about our process on this Drupal 8 project or have a look at the project from the client's point of view on our site, advomatic.com.

We were asked by Poets & Writers (anticipated site release summer 2016) to help them come up with an upgrade plan for their Drupal 6 site. As part of discovery, while auditing their site, we explored the possibility of a move to Drupal 8. The site uses a complex combination of contributed modules and custom code, so we recommended Drupal 7. Their theming and content administration requirements were much more achievable using existing solutions that we’ve developed over years of D7 site building.

Find help to a good plan

As you've seen in this article, there is always a way forward no matter what your current Drupal setup is. Depending on your resources, timeline, and requirements, there are compelling reasons to use either of the available Drupal versions. Since the upgrade process can be daunting, find a trusted partner to assist in developing the right approach for your project.