Semantic versioning special! Every day, developers in the Drupal community work on improving our open source software. So far in this series, we have been concentrating on profiling some of the most useful modules, projects, and tools available for Drupal 8. This week, however, we're talking about something brand new in Drupal: significant new features being added to our current major release and the ability to do this on a predictable, regular basis! Welcome, Drupal 8.1.x!

Thank you, Jess (xjm) and Angie Byron (webchick) for chatting with me about what's been going on in Drupal core since the release of Drupal 8.0.0 and helping me put this post together!

The Ultimate Guide to Drupal 8 has been updated for 8.1.x!

Check out the Drupal 8.1.x revised edition of The Ultimate Guide to Drupal 8!. Angie Byron and I went back through the guide, updating it for Drupal 8.1.x. Along the way, it felt great to throw out large swathes of references to issues that have been resolved and adding information about many results of the community's hard work since the release of Drupal 8.0.0. Thanks to everyone who contributed to Drupal 8 so far!

Drupal 8, the story so far

Drupal 8 core comes with lots of improvements over Drupal 7--For a quick reference, the Drupal 8 is Here page on Drupal.org has a high-level overview.. I'm sure you're aware of many of them: translation and internationalisation, the Views query and display builder in core, CKEditor WYSIWYG, configuration management all built in ... fields and entities everywhere; mobile-first front end, REST support, improved accessibility; performance improvements thanks to new granular caching, no JavaScript for anonymous visitors, and support for PHP 7; lots of tools built by our friends and colleagues in other open source communities like Symfony, Twig, Guzzle, YAML, Doctrine and more. And more and more!

Why is Drupal 8.1.x important?

Jess explained to me, "Now developers can rely on Drupal to follow the widely known semantic versioning standard, which means better APIs as well as fixes to contributed-project blockers without disrupting existing sites or APIs. In particular, the Entity API has lots of improvements in 8.1.0. The improved Composer support and the new JavaScript testing API are also huge wins for developers. This also means that site and business owners can have have confidence in Drupal 8's ability to innovate safely in the future."

I wanted to know how it was, after five years of hard work getting Drupal 8.0.0 out the door, to turn around and get to work on the next release right away. And on the other hand, how did it feel to be able to get a solid new release out in less than six months?

Jess explained that, "The core maintainers deliberately kept the focus tight on fixing bugs and a few top priorities like the Migrate UI and JavaScript testing. We invested a lot of time planning and carefully deciding which changes were safe to deliver in patch releases versus the upcoming minor release. This strictness helped ensure that only a handful of critical regressions were introduced during 8.1.x development (compared with hundreds during 8.0.x development). And 500 people contributed to almost 800 patches in 8.1.x!” 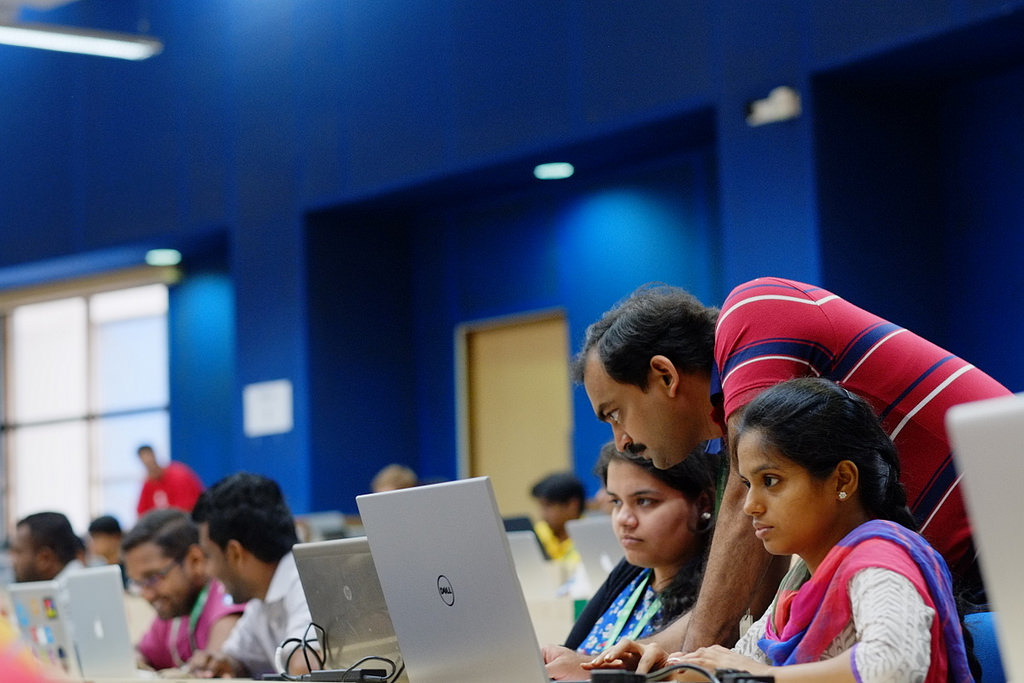 Drupal 8.1.x has two new experimental, alpha-stability features in core. One is the user interface for migrating from Drupal 6 and 7 websites and the other is the BigPipe module. Migrate, Migrate Drupal, and Migrate Drupal UI modules are all in core now and should encourage developers and site owners to continue working on completing the migration paths to Drupal 8 from our last two major versions. BigPipe improves perceived performance of your site for visitors by delivering static, cached content instantly (without waiting for the whole page to render) and delivering other, dynamic page content (think shopping carts, friends lists, and so on) once it is rendered.

The "experimental" status of these features means that these might become a stable part of Drupal core in a future release, but they need further testing in the field by site builders and developers. "Alpha stability" means that these features are intended for testing but may still contain bugs or other problems (including security issues), their APIs may still change, and there is no guaranteed upgrade path from alpha versions. (Note in particular that the Drupal 7 to Drupal 8 path is not yet complete.) 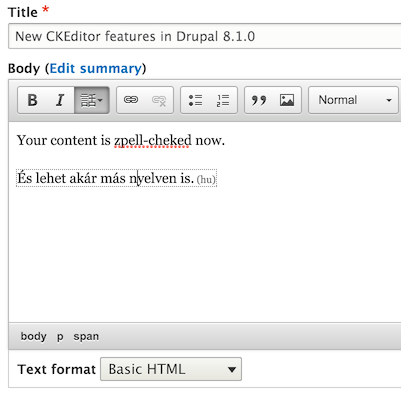 Our integrated WYSIWYG editor, CKEditor, gets new spell-checking and language buttons. There's an API for JavaScript testing. Drupal core and its dependencies are now packaged by Composer, so you can use Composer to manage your third-party dependencies directly. The help page in Drupal 8.1.x is more extensible and now includes Drupal 8's interactive Tours. And Jess tells me that there are a bunch of new API extensions and new features for developers in 8.1.x that you can see in the Drupal 8.1.0 release notes. 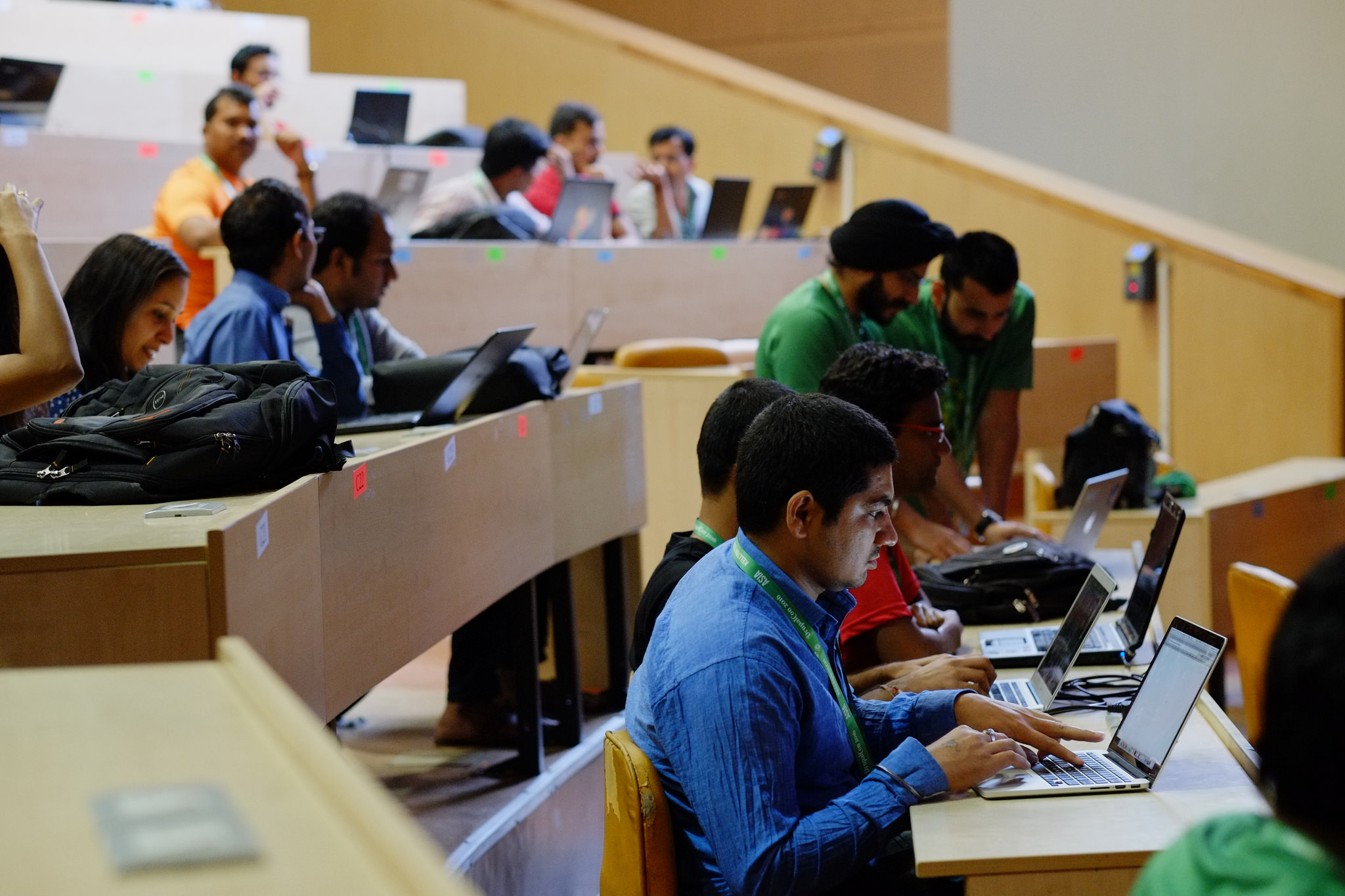