In the previous articles in this series, we’ve talked a lot about the technical solution to the challenges that deploying websites to China brings with it. What’s not been discussed so far is quite possibly even more important: the people aspect.

After 6 years of working in the CMS world, it’s become increasingly evident to me that technology choices are based on three components:

These three components allow for more comfort within the enterprise -- around the functional aspects of the solution available, the vast supply of development capability existing, and the support structures around the solution to ensure the customer never fails.

From a grassroots level, everything begins with the developers. Before a CMS starts to be adopted by enterprises within a country, there is an ever growing pool of developers in the community, working on improving the overall product. Within the Drupal community, it is these developers who start the in-country communities and mentor other developers. By further expanding Drupal’s reach in this manner, it has become one of the largest collaborative communities in the world.

In China, we’re still growing the community and the enterprise’s awareness. This is evident from both the quantity of contributory developers as well as the number of well known brands using Drupal such as GeForce, Tesla, and Fendi. These brands however are still predominantly from overseas where Drupal adoption is higher rather than in China.

Within China, the registered developer community is approaching 500, with 443 currently registered as part of the groups.drupal.org group. Another measure of Drupal's reach: at least thirteen development agencies are currently providing Drupal services into China.

Unfortunately, without large scale commercial backing, it’s unlikely that solo developers would ever manage to sell the idea of a new technology into an enterprise.

Taking the Red Hat or Canonical example, the adoption of any open source software is difficult without an organization backing the growth and support of that software. Indeed, someone always needs to be held accountable and it is in this way that a symbiosis between open-source software and the companies that support it exists. Neither would exist without the other: the product being the genesis of the company and the company being the safety net around the product.

From my experience within the Asia Pacific, a burgeoning territory, focus and enablement must be directed at three important tenets to empower developers: Language, Communication, and Culture.

The primary difficulty within any global community is the language barrier. Even though Drupal is the most multilingual CMS system available for use, global communities still consist of people and the individual languages they speak.

Due to its heritage in the multilingual melting pot of mainland Europe, Drupal can be translated easily into any language in existence. Indeed, Drupal 8 has been translated into 114 languages so far, which enables its usability in a global context.

A gap does exist however, in the documentation required to both build and manage Drupal. It is this documentation that is critically required in lieu of hands-on tuition.

Within China, a large proportion of developers have no working affinity with English. Indeed, there’s a cited value of only 0.8% of the population able to speak English. This leads to a lack of use of English documentation and a general eschewing of the predominantly English speaking community.

Since drupal.org and its subdomains aren’t multilingual just yet, the Chinese Drupal community has fractured into three separate community sites with each site vying for control of the community:

The discussion here takes a first step at consolidating these three sites into one, but ideally, all users should be directed back to groups.drupal.org. This however, is contingent on those sites being made fully multilingual.

On top of the inevitable language barrier, how does the Chinese speaking community communicate when the typical user does not use the CMS’s main communication platform, drupal.org? A large proportion of the community use WeChat, China’s all in one platform for chat, social, bill payments, online stores, and business/city services.

While in Shanghai for Drupalcamp China 2016, I was invited to the WeChat chat room specifically for the event. It was in here that session times were communicated, news announced, and feedback requested.

The use of a modern chat app everyone was familiar with meant it felt more inclusive to anyone involved in the camp: developers, project managers, newbies, and tech-experts alike. Its ability to automatically translate messages allowed all attendees to be part of the conversation regardless of their native tongue. 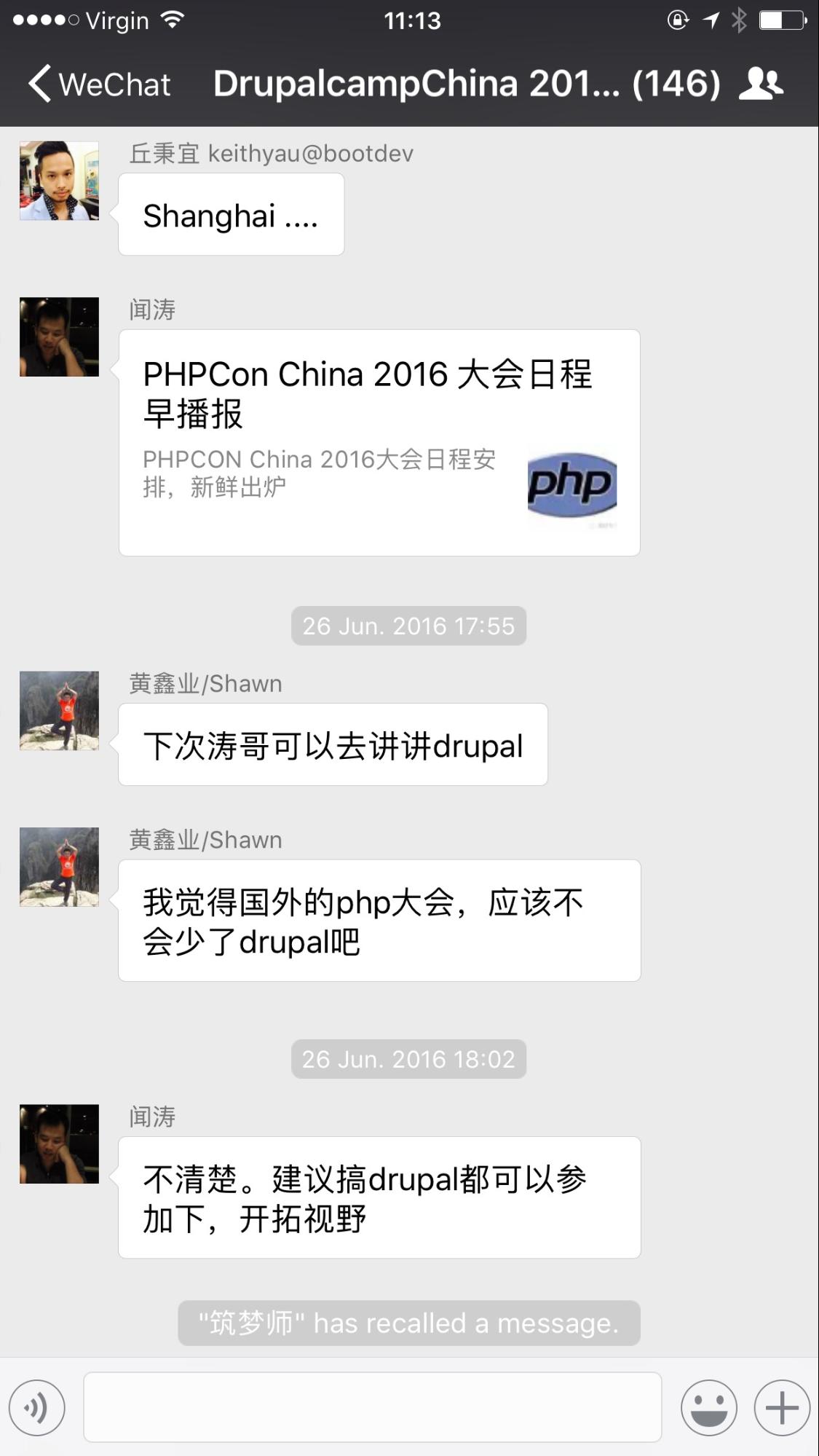 Large factions of the Chinese community, individual events and even digital agencies have WeChat chatrooms dedicated for their use. By far and away a more popular communication system than the Internet Relay Chat (IRC) used by the rest of the Drupal community, WeChat has over 1.1B accounts and over 570M daily active users. The Freenode IRC network that powers Drupal’s chats commands only 90k users in comparison.

This is one place I think the Chinese community has it right. The learning curve to use IRC is unfriendly and most users in the Drupal channel do not use IRC for any other purpose, making it another unnecessary chat client.

The advantage of WeChat here is that it’s ingrained in most people’s daily lives in China. In the same way that WhatsApp or Facebook Messenger is used daily by users outside China. Perhaps it’s time the Drupal community makes itself more accessible by moving to an alternate method of worldwide communication that doesn’t rely on ancient technology that only a niche subset of people use.

Communication tools shouldn’t be a barrier, rather they should assist in the growth of the community, and everyone in the community should eventually find their way back to drupal.org and groups.drupal.org.

Part of what’s changing currently in China, but still leaves room for improvement, is the culture of sharing and mentoring inherent in a true open-source community. While there are a number of standouts representing China on the world stage, many of the community remain isolated within the China bubble. Parallel groups, discussion fora and real time chat networks exist solely for the Chinese group.

From speaking with developers and architects in the Chinese community, I’ve learned of some of the cultural values preventing more openness and sharing with the wider global community. With a degree of pride at stake, exposing code of any kind comes with a layer of risk -- bad code has the potential to be laughed at rather than constructively criticised, good code can be scrutinised until flaws are found. Similarly, assistance from developers outside of China isn’t always welcome.

Cultural issues also affect businesses evaluating the use of Drupal. Sponsoring the development of modules and functionality isn’t a common practice, with the exchange of money for goods and services being more important than a donation of time or code, regardless of the fact that Drupal was first obtained by all for zero dollars.

A commonly held view is that a 100% Chinese base distribution would be advantageous to developers and businesses across the country. Much like the Demo Framework provides, a China Framework may start to instill a sense of collaboration and at the same time provide accolades for the initial developers.

Bearing these points in mind, my next blog post will focus on how both open-source and Drupal communities can be cultivated in China.