Josh has over 10 years experience working with large scale Drupal inside some of the world&#039;s largest enterprises, governments an

Next.js is a natural starting point for that. It’s an adaptable JavaScript framework, built on top of React.js, with great support, stability, performance and security features. We partnered with Chapter Three, maintainers of Next.js for Drupal, to build Next.js for Acquia CMS: a Next.js starter kit for Acquia CMS.

Note: This is currently an alpha stability product that is not yet formally supported by Acquia. We will be making a stable release soon!

In this tutorial, you won’t set up a new Drupal site–you’ll use ours. This way you can focus on playing around exclusively with the Next.js starter kit.

We’ll start with a git clone:

To use the starter kit locally, you’re going to need npm (Node Package Manager) which will give you a Node.js engine (node) and npx (node package execute). If you already have it installed, go ahead and skip to the next step.

Now skip ahead to the “Install Node Packages” section.

If you don’t want to run Node locally and prefer to keep things in a Docker container, then this section is for you!

With next-acms cloned on your host machine, you can now mount it to a standard node container to interact with it. Keeping the container ephemeral, the docker commands below spin containers up and down for each command:

The docker commands here also connect port 3000 on your host machine to the docker instance. So from either `run dev` or `run start` you’ll be able to visit http://localhost:3000/ on your local machine and connect to your node container.

To connect the Next.js site to our hosted Acquia ACMS instance, we’ll pre-populate the Next.js for Drupal environment variables.

Then, change the contents of .env.local to the following:

Here is what these environment variables are doing:

This starts the development server on http://localhost:3000.

When running a development server, node is listening for changes to the codebase and reloading the server to reflect those changes. It’s also not caching anything as that can get in the way of development.

If you want to run things faster, you need a production build. While the development server builds and runs the application at the same time, production runtime is a two phase process:

Notice that  during the build process, Next.js is fetching data from Acquia CMS and building static versions of the site. Then when you run that build, Next.js is loading those static pages directly from your filesystem making the performance lightning fast! 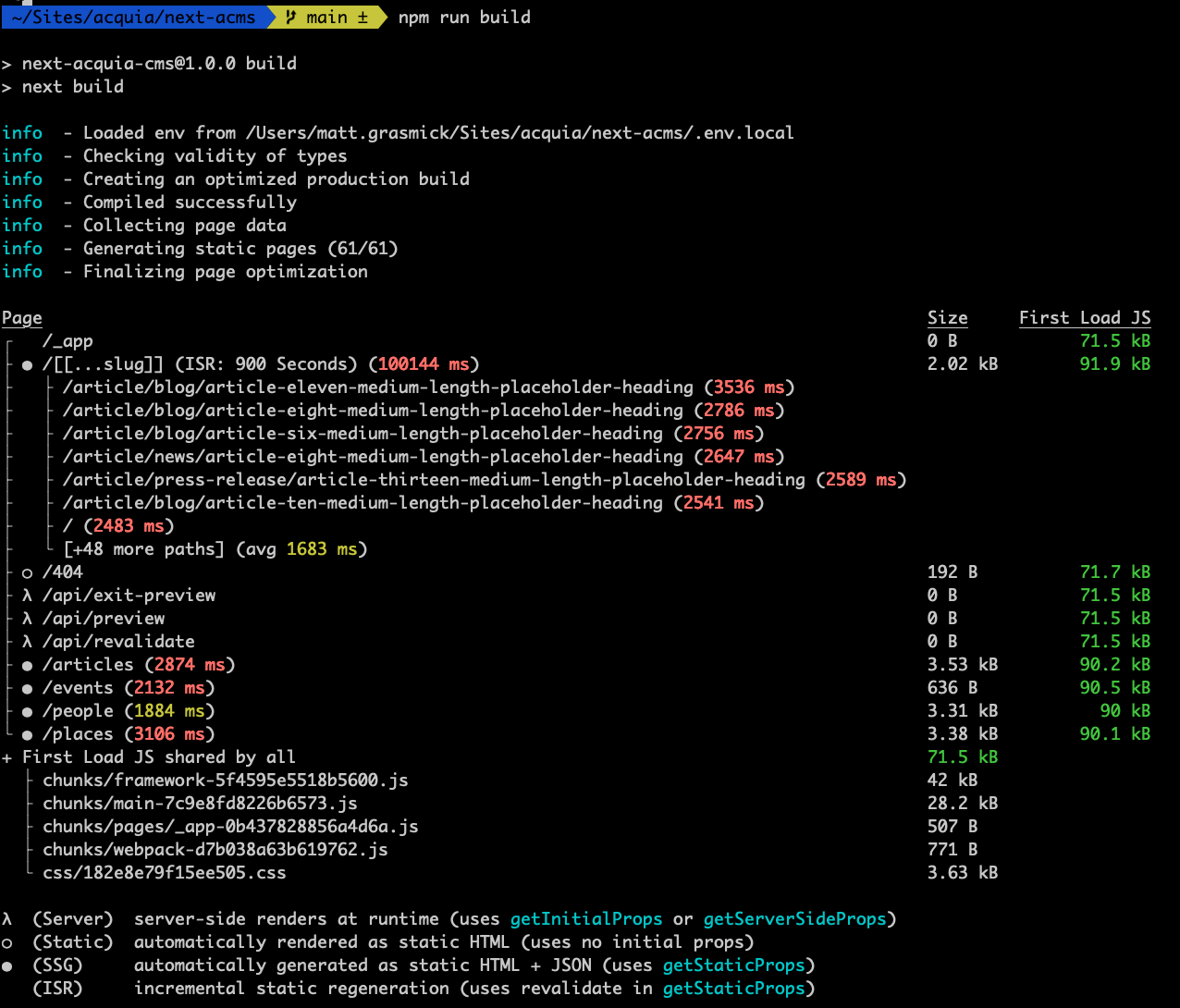 This two step process can be done with a single command

By default, next-acms will serve cached content, but after 15 minutes, the next request will revalidate the content with Drupal and update/sync it into Next.js using Incremental Site Regeneration (ISR). We configure next-acms to wait for the response from Drupal to ensure fresh content is sent instead of stale cached content.

Outside of this Hello World example, you can also configure Acquia CMS to notify Next.js of content events enabling event driven revalidation. In this mode, content is out-of-sync for only a second or so. We'll cover this in future blog posts or tutorials on dev.acquia.com.

Found an issue? Let us know!

next-acms is an open source community project. You can find the issue queue on github. If you've found an issue, let us know! and even file a pull request!

A big pain point of javascript applications is time-to-meaningful-paint. That’s the time it takes in the browser for a javascript application to show something that’s meaningful and interactive to the end user. That’s because the experience is dependent on the resources of the visitor’s device which also has to wait for all the dependencies to download.

Hosting compatible JavaScript frameworks, like Next.js, serverside, allows you to pre-render JavaScript applications meaning the client browser can focus on painting immediately. This is what makes the production build in Next.js so fast.

At Acquia we host and support Node.js applications (like Next.js) optimized for working with a content backend API built on Drupal. If you’re interested to find out more, get in touch with one of our team.

How to Give a Great Sprint Demo

Drupal Cache Strategy with Varnish and Edge CDN on Acquia

Git rebase: Under the hood