How to Handle Missing Data in Machine Learning: 5 Techniques

Data Science competitions such as Kaggle and KDnuggets have become very popular in recent years. They have real-world data and are a great way to have hands-on practice to gain experience.

When I was in grad school, I took many courses on machine learning and participated in many of these competitions to apply the knowledge that I learned in school. Even after applying so many complicated machine learning and deep-learning algorithms, I was surprised to see the leaderboard when I wasn't even in the 60th percentile.

Why the poor showing? In most of the cases, I was not handling the missing data correctly. That motivated me to learn how to handle missing data the right way.

What is missing data? In simple terms, it's data where values are missing for some of the attributes. Now that we know how important it is to deal with missing data, let's look at five techniques to handle it correctly.

This is an imputation rule defined by logical reasoning, as opposed to a statistical rule. For example, if someone has 2 children in year 1, year 2 has missing values, and 2 children in year 3, we can reasonably impute that they have 2 children in year 2. It requires no inference, and the true value can be assessed. But it can be time-consuming or might require specific coding.

Even though it's accurate, deductive imputation cannot be applied to all datasets. That's why we need to use statistical ways to impute the missing values in some cases.

Let’s apply these methods on an example dataset. We will use the Pima Indians Diabetes dataset (Download from here) which contains medical details including the onset of diabetes within 5 years.

These are the first few rows in the dataset.

You will notice that there are missing observations for some columns that are marked as a zero value. Specifically, the following columns have an invalid zero value indicating missing values: 1: Plasma glucose concentration
2: Diastolic blood pressure
3: Triceps skinfold thickness
4: 2-Hour serum insulin
5: Body mass index

In this method, any missing values in a given column are replaced with the mean (or median, or mode) of that column. This is the easiest to implement and comprehend. In our example dataset, ‘Triceps skinfold thickness’ is one of the variables that have some missing values. All the missing values in this variable will be replaced by the value 29.12 which is the mean of all the values that are available to us. The same method can be applied to other variables as well. 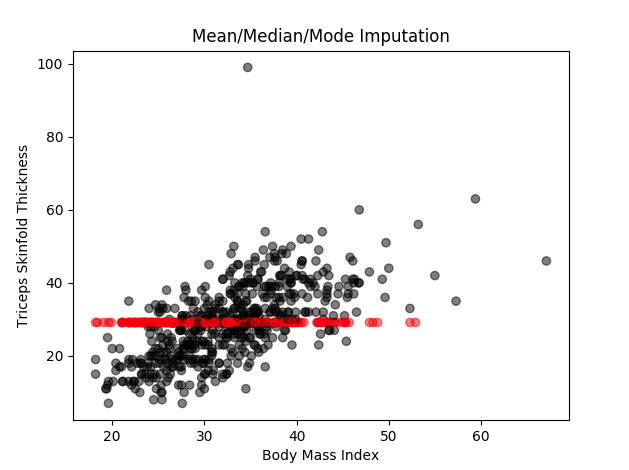 You can see in the diagram, all the missing values have been imputed with the same value.

This approach replaces missing values with a predicted value based on a regression line.

In here, we are using all the complete observations of 'Triceps skinfold thickness' variable to predict the missing observations by using 'Number of times pregnant', 'Body Mass Index' and 'Age' as predictors or independent variables. This method assumes that the imputed values fall directly on a regression line with a non-zero slope. As you can see, it is easy to comprehend and seems logical at the same time but it can affect the variability and the distribution of the data to some extent.

The code to accomplish that would look something like this: 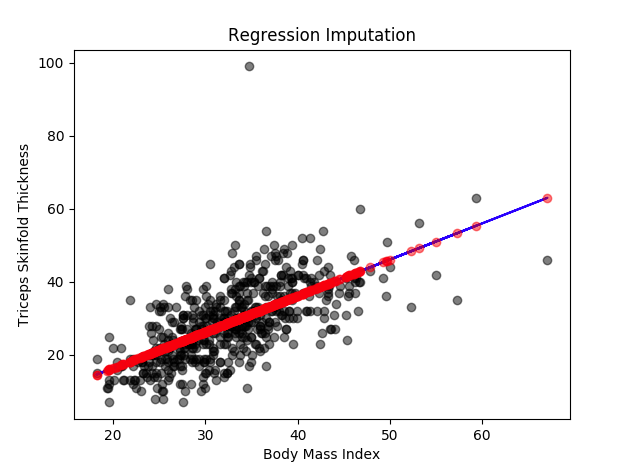 You can see in the diagram all the missing values are imputed based on a regression line using other variables as predictors.

This aims to preserve the variability of data. To achieve this, we add an error (or residual term) to each predicted score. This residual term is normally distributed with a mean of zero and a variance equal to the variance of the predictor used for imputing.

In the example that we took earlier, it will look like ‘Triceps skinfold thickness’=a + b1(‘Number of times pregnant’) + b2(‘Body Mass Index’) + b3(‘Age’) + ... sigma where sigma is some random error. 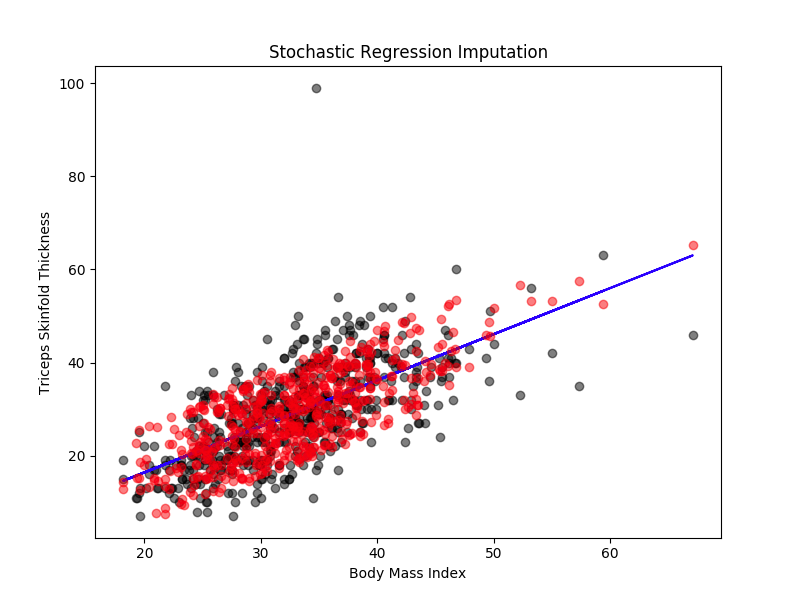 As you can see in the diagram, the missing values are imputed based on the regression line plus some error.

As you can see, some methods are quite complex and require a lot of coding. In general, a complex method doesn't necessarily mean it is the best method for all datasets.

In other words, there is no one right method to always use to impute missing values. For example, it is quite possible that deductive imputation could be a much better choice as compared to the regression-based methods in cases where there can be logic applied to impute the missing values.

You can usually guess the right approach in the initial exploratory data analysis phase of your project.