Why DrupalCon London Codesprint was so good

Confession: I'm not a coder, and I love code sprints. Previously, I wrote about how Awesome BoFs are, but really, the best part of DrupalCon is: The Code Sprint. And London's was a great example. Here's why: the context, the space and organization, which I'll describe in more detail. Even with the amount of people involved (150+ about 10%) we could have fit more! I'd also like to convince you why you really don't want to miss the next one... because you will be guaranteed to experience the zeitgeist moment you can only get at the code sprint at DrupalCons.

Reflecting on DrupalCon, core developer Chx said this was a "Landmark DrupalCon". The core developer community rose to a succession of challenges leading up to DrupalCon- and are now implementing a series of major changes for Drupal 8. Contributors are enthusiastic, communication is improved, and consensus is being achieved. And I'm looking at this in awe.

The solutions contributors are working on are lifting Drupal's collective spirit. Everyone I spoke to seemed to be working on something productive, engaging and exciting. Even on the edges, I could feel the passion spreading out into all areas of the project. Read the summary of the outcomes and decisions on Chx's blog.

But don't be surprised at this level of passion and collaboration- it is open source, after all. Sprinters were collaborating in response to blog posts, presentations, and on-going discussion at the conference. You can see the overview of all the sprints on the conference website.

We often focus on what gets done, but perhaps we don't talk so much about how it feels. At that is important too. 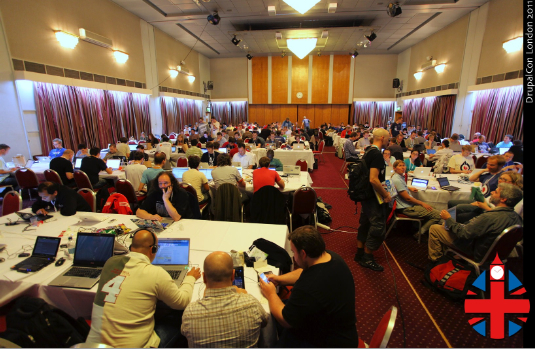 Photo of code sprint by Pol used with permission.

In London for the final day code sprint, we were all in one big massive room, with long tables and a spill over area with cafe style seating. (We were able to get the air adjusted, because that many bodies and machines do generate a good bit of heat.) There was something so... well, moving about seeing all the community working together. In that environment, I had several "everything is connected" conversations.

I'm absolutely fascinated with facilitation. Perhaps those who understand the design of social spaces, the theatre of interaction, and dramaturgical sociology can explain why this type of convergence is more likely to happen at DrupalCons, and in physical spaces like this - but it's sufficient to say, having everyone "together" increased this feeling. I prefer this over closed room segregation. More open spaces, better. What do you think?

Alongside the regular conference sessions are a series of core conversations, where the most active contributors can present on topics about the direction of Drupal itself. The sprint is then, a culmination of these conversations.

As well, now with the new structure of Core initiatives set up, Initiative leaders are easily accessible for guidance at the sprints. They see the big picture because they communicate to each other and help new contributors find a way to get involved. Trust me, there is a place for anyone who wants to get involved. The satisfaction of accomplishment and gratitude is worth finding your place.

Though my colleague Mark Sonnabaum did tweet soon after that sessions were great at DrupalCon, let's imagine for a moment, as he suggests above, a big part of DrupalCon was a code sprint. It is possible! A talented group, Aspiration Tech, specialize in facilitating tech events where sessions are actually de-emphasized, and instead you have a proliferation of BoFs and code-sprints. Highly engaging, interactive and productive, I experienced their work at Mozilla's Drumbeat fest.

We'll be doing something similar for our own DrupalCamp in Derry, de-emphasizing sessions, and increasing interaction. Please come along! http://drupalcampireland.org/ If you're working on alternative models in your regional camps, I would love to share ideas.

I missed out on the code sprints in Copenhagen. Somehow my hotel was far, my flight leaving too soon- I didn't get involved. This left me feeling like I hadn't really connected to the community. At Szeged and Paris, the sprints were may favorite parts of the events. Now, I see that this affected my level of contribution and engagement after Copenhagen. I didn't really dig back in again until I volunteered for DrupalCon London. (And that, my friends, was awesome too.)

I would urge anyone to get involved- and contribute, especially at the code sprints. Even if you're not a coder, you can be confirming bug reports, testing patches, writing documentation, creating marketing or training materials, planning event logistics, or even organizing your own local code sprint or camp... and this is just a selection of the stuff that I've been able to do as a contributor thanks to the mentoring I received at the code sprints.

Perhaps you may think you don't have enough time, and yet, I would say, how can you afford not to get involved? It's a unique opportunity to be effective, make an impact, and be appreciated. That is quite satisfying. Is there anything other reason you work? If you're burnt out in your own work, and using Drupal - you may find that connecting your local Drupal community and joining the code sprints at DrupalCon will energize you. Find your local groups here: http://tinyurl.com/localdrupal

Through these activities, I've made friends, got many Drupal hugs, learned so much, and developed a sense of belonging that makes my work so much fun and meaningful. Work becomes more fun than fun (nod to Noel Coward).

So don't be shy, step up, introduce yourself at the next code sprint; through your meet-up, regional camps, and hopefully- at the next DrupalCon! And hopefully we'll see more tweet's like Gabor's.