If you haven’t already seen Acquia Migrate: Accelerate, take a moment to watch this short demo video and pay special attention to the UI after the 40-second mark.

What you’ll see is a full-page React application. Except for the administration toolbar at the top of the screen, every visible element is rendered in the browser with React, even the breadcrumbs. This architecture allowed us to create a user interface that looks, feels, and is an integral part of a Drupal 9 site without compromising our ability to create a maintainable and modern UI. 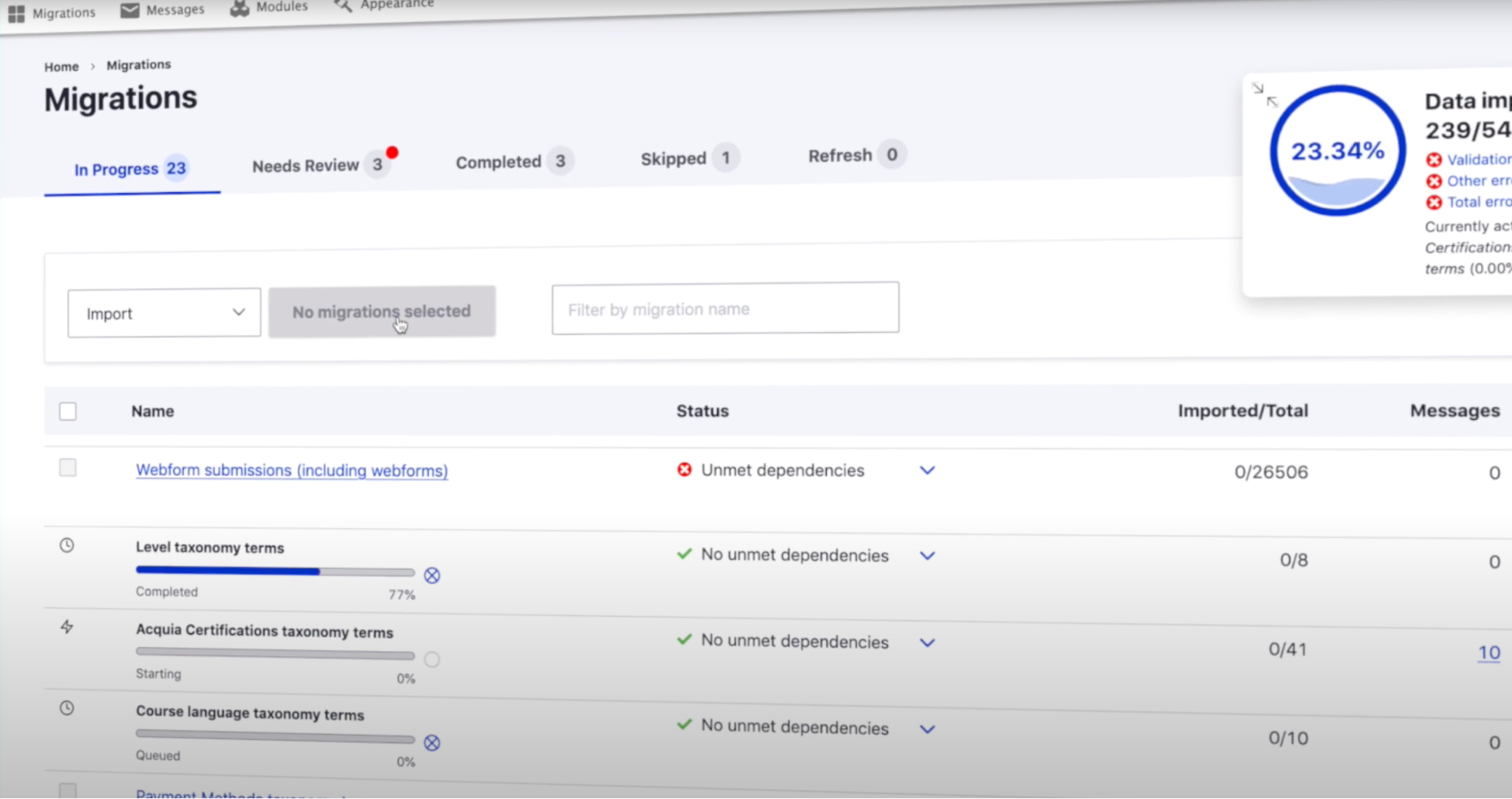 Why didn’t we use Drupal’s existing back-end rendering system, a.k.a. Twig? Here is a sample of all of the features that we incorporated into the UI. Given the same resources and without React, we could only have implemented a few of these:

While we believe the feature-list above is very impressive when compared to Drupal-rendered interfaces, they’re not very impressive if you’ve been building decoupled applications for a while. Here are some technical elements that we believe make our approach fairly novel within the decoupled Drupal community:

We believe many of these features deserve posts of their own, but four key design choices—made early in the project—enabled most of them. We’ll go into each one in their own section below. They were:

Not everything went according to plan. In the last section, we’ll cover a few cases where we struggled with the decoupled architecture.

Here’s a sample of some of the routes that our application handles:

Despite the predictable URLs described above, our JavaScript application does not have any API URLs or URL path patterns in it. Instead, it learns about each endpoint from the back end. Here’s how it works:

For example, one of our link types was called update-resource. We documented that, when followed, the JavaScript application MUST send a PATCH request to the href of the link with the data provided by that particular link. Each resource representing a single migration might have many of those types of links associated with it. Here is one such link:

Once this link was followed, the next request for that same resource would no longer have that link, instead, it would have a link whose title was “Unskip” and the data.attributes.skipped field value would be false. As far as the React application was concerned, these links were indistinguishable. Moreover, the React application did not have to understand that a migration could be skipped or unskipped. That business logic was kept on the back end.

Using hypermedia to control the application also meant that we were able to add new behaviors without changing any code in the React application. This was used several times to prevent our engineers from being blocked on one another: truly decoupled collaboration was a big productivity boost!

For example, if we want to add the ability for a user to postpone a migration in the future, a back end engineer could implement the business logic and add a link with the title “Save for later” along with some different data attributes. Since the React application will simply render the new button alongside the “Skip” button just like any other update-resource link, a front end engineer doesn’t have to get involved. In that way, we can say that the React application learns about new endpoints at runtime.

The Decoupled Pages module provides a quick and simple way to define new Drupal routes which can be taken over by a single page application (SPA), often written in Javascript using React or Vue.

Without going into too much detail since the project page provides technical documentation, the concept is that by declaring a route and any additional SPA-routed paths in a module’s routing.yml file, Drupal can serve the SPA to the user’s browser. Since Drupal knows about those paths, the SPA will load even if the user follows a link directly to an SPA-routed path. This eliminates the need for custom Apache or NGINX server configuration in order to serve the application’s main JavaScript file (often named index.js). This also means that non-decoupled pages can easily link to decoupled pages and vice versa: Drupal can link to internal routes rendered by React.

Throughout the development cycle, we made continuous improvements to the user experience in response to multiple rounds of user tests, a private beta, and a public beta. At the time of writing, Acquia Migrate: Accelerate has reached limited availability. After each of those experiences and milestones, our understanding of our users’ needs changed—as did our understanding of the product itself.

Since we knew from the beginning of the project that we would be actively discovering what exactly the product should do, we knew we had to be especially careful of technical debt and regressions. In other words, we needed automated testing, but we needed those tests to be very tolerant of large refactorings and a quickly evolving user interface. Therefore, we heavily preferred high-level tests to low-level tests.

Overall, we were happy with this approach. No new feature was added and no bug fix was accepted until it had at least one test. This isn’t to say we only used functional tests, any custom JavaScript functions were covered by unit tests using Jest.

For the UI, we used Drupal’s Nightwatch testing system. Nightwatch.js emulates a user clicking through the product to exercise different product features. By using this tool, we could move and rewrite React components without throwing away their tests (and the time we spent writing them). And we had a high degree of confidence that we weren’t breaking any feature that we had already gotten to work earlier in the development lifecycle.

However, these tests were not perfect. We were occasionally bogged down by the confusing behavior of its web driver (i.e. the library that uses a standard browser API to pretend to be a real user). This meant that we had to write our markup with the web driver in mind. For example, we had to add unique classes or IDs so the driver could find a button or link to “click”. These selectors needed to be maintained and updated as the UI evolved.

For the HTTP API, we used Drupal’s Browser testing system. We used the JsonApiRequestTestTrait to account for the fact that we were not testing HTML responses, but JSON:API ones. To simulate an actual migration, these functional tests had access to a Drupal 7 fixture database. This meant that we could be confident the tests were realistic and and truly exercised the migration system.

Our API tests used the hypermedia controls described above as if it was the React UI’s JavaScript. For example, our tests would make an initial HTTP request, deserialize the JSON, search for an import link, then follow the protocol documented for those types of links to execute a migration. Finally, our tests would assert that some content had actually been imported.

To be upfront: we would not approach this problem differently if we were asked to build the product again. However, some things were more difficult with our decoupled architecture than if we had gone a more conventional route. They were:

In a conventionally built administration interface, module developers rarely have to worry about the theme. For the most part, they can use Drupal’s Form and Render API to generate markup which inherits its look and feel from the site’s administration theme.

Drupal core comes with many design elements like checkboxes, dropdowns, draggable lists, etc. These have gone through a rigorous review process which means that they’re accessible and internationalizable out-of-the-box. Since we weren’t using those, our front-end engineer had to be especially mindful to avoid accessibility issues. At this time, the application isn’t fully internationalizable either, although we did try to keep that possibility open by isolating any translatable strings.

One of the features that we implemented was the ability to add many long-running migrations to a queue and continue navigating the application while they were being processed.

Unfortunately, PHP and Drupal do not have a convenient solution for keeping long running processes, like a migration, alive. Drupal works around this shortcoming with its Batch API. This system uses an archaic browser behavior to repeatedly redirect the browser; it uses each subsequent request to process a fraction of the remaining items in the batch’s queue. Those pages have a premade progress meter.

Had we not made a React application, we would likely have reused this system and avoided a lot of work. Instead, we had to create our own batch processing system and overcome a number of challenges with a client-side queue. However, we feel that the final user experience was worth the trade-off. Unlike the built-in batch API, our implementation empowers users by displaying fine-grained information about the state of each queued migration, by enabling them to add and remove migrations from the queue, and by providing them with the ability to pause or cancel the entire process without difficult to remedy consequences.

This was more of a tedious annoyance than a major shortcoming: we had to maintain our application’s UI routes in two places in order to enable bookmarking and shareable links to pages handled by our React application. That’s because Drupal needs to know that a request for /migrations/migration/{migration}/{tab} should serve our SPA’s code instead of responding with a 404 Not Found.

We could not take that same approach because we wanted our UI to be integrated with the rest of the site’s Drupal-rendered routes and we couldn’t require special server configuration since we wanted the app to work locally without any special set up. Therefore, for every route managed in our React application, we also had to declare that route in a routing.yml file within our Drupal module so that Drupal would know to serve the SPA code instead of a 404.

All Acquia Cloud Enterprise customers are eligible for Acquia Migrate Accelerate! Check out our product overview or request a demo today! Talk to your Acquia Account Manager to get started, and then our getting started documentation will get you off and running!