I'm a lead developer at Bounteous who writes clean, methodical code for Drupal. I build sites that are constructed to be lean and powerful, but also aesthetically pleasing and intuitively usable. I have been in the industry since 2009 and am experienced in all stages of site-building. I began as a Front-End developer but have grown into a full-stack role.

Drupal’s site building UI can be confusing and overwhelming for new comers and parts of it even unnecessary for headless CMS implementations.
We partnered with Acquia to make site building with Acquia CMS easy for frontend developers. A key way we did this was with the API dashboard.

In Acquia CMS Headless, there are two general types of end users:

These developers are commonly working with javascript/typescript frameworks such as React, Next, Vue and Swvelt are do not need to be PHP or Drupal developers (the technology Acquia CMS is built on).

For these developers, Acquia and Bounteous partnered together to build a headless dashboard into  Acquia CMS headless to make API management easier. Let's take a look!

The headless dashboard can be accessed from differently locations. In Hybrid mode, it can be found as a drop down from the Tour menu item in the admin menu navigation.

When operating in full headless mode, the Headless Dashboard is found under the API menu and is just called "Dashboard".

At the top of the dashboard, you’ll see access to the default endpoint: json:api. json:api is a standardized format for communication over APIs. There is wide support for json:api across many languages including drupal-jsonapi-params: A library for building query parameters when connecting with Drupal CMS’s JSON:API.

All of Acquia CMS’s data model can be accessed through the json:api endpoint and you can access the documentation for that endpoint through https://www.openapis.org/: a standard for API documentation. It comes in with two UIs: Redoc and Swagger UI.

Viewing the article content type from the default content model in Acquia CMS through the Redoc API endpoint documentation inside the CMS.

With Acquia CMS users and roles, you can customize how consumers authenticate with your API (using API keys) and what parts of the API they can access (using users and roles).

By default, Acquia CMS is setup for OAuth authentication using Simple OAuth and Consumers. From the API Keys panel in the headless dashboard, you can create new consumers and determine which users and roles a consumer should represent.

Note: In Acquia CMS, permissions are granted to roles.  Roles are granted to users and a user is associated with an OAuth consumer. Whatever permission that user has will then be permitted to the consumer also.

Any user assigned the Headless Role, they will also be listed here in the dashboard under API Users. This way it is quick to see all the users that represent your API consuming third party applications.

Out-of-the-box, Acquia CMS comes ready to integrate with Next.js for Drupal: a library for native integration between Next.js and Drupal over the json:api endpoint. Acquia CMS also has a next.js starter kit here (see tutorial).

If you’re interested in using Next.js, check the Next.js starter kit check box in the Acquia CMS Tour setup. This will precreate the Next.js site, user, roles and configuration ready to integrate with your next.js application. 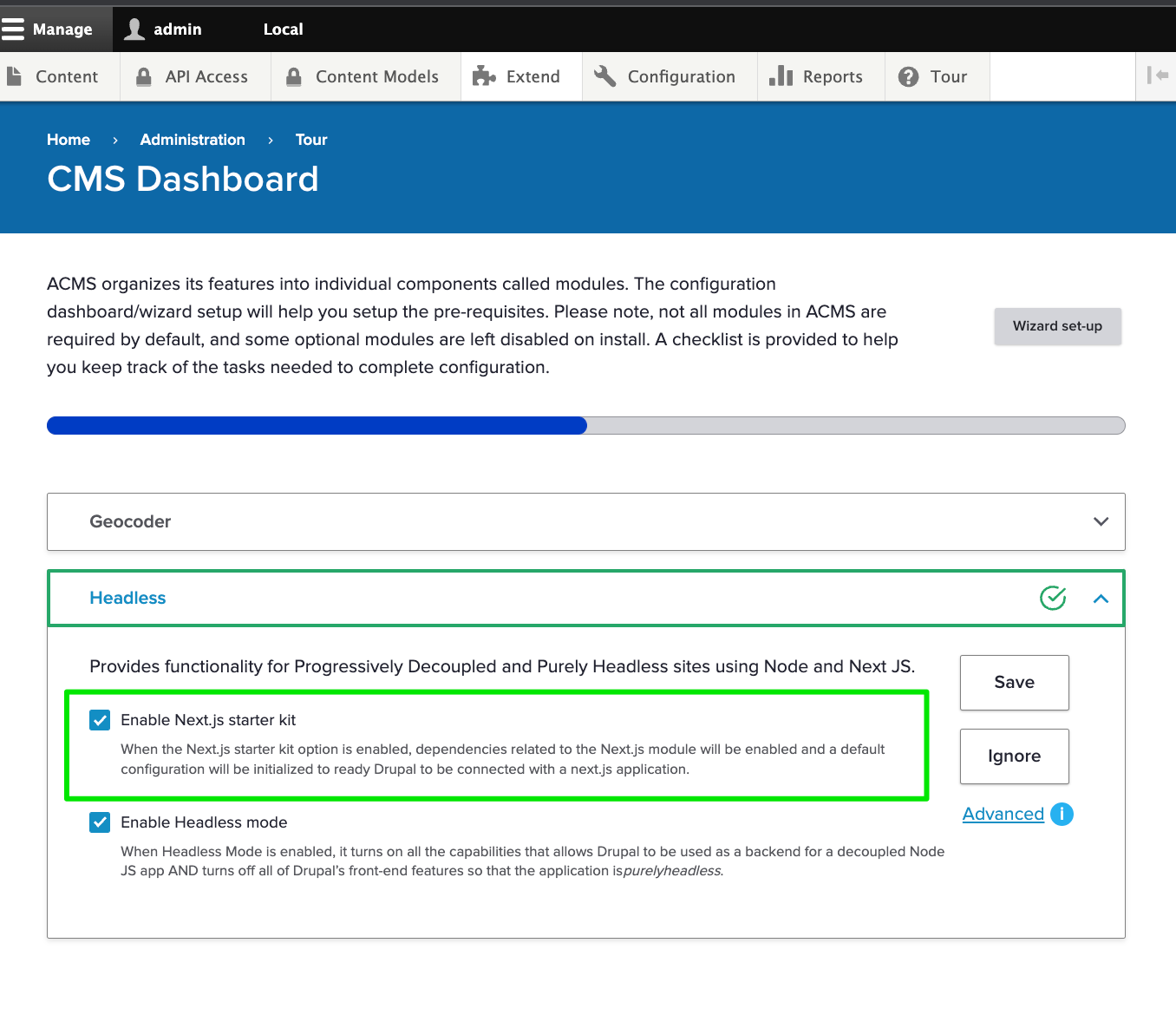 Next.js site preview is not fully available in the Acquia CMS Headless beta release. For it to work, you must have “headless mode” disabled so that node pages will be rendered by the CMS. We'll be fixing this before General Availability (GA).

If you’re a developer building with Acquia’s headless CMS, the headless API dashboard makes working with Acquia CMS easier than ever. Try it out now!

Start me up: Using starter kits for Next.js and Acquia CMS

What is a starter template in Drupal?